By Jason Laughlin, Aubrey Whelan and Allison Steele at the Philadelphia Inquirer
UPS workers have been a critical part of the Philadelphia region’s vaccine supply chain, yet for months weren’t eligible to receive shots.

That all changed on Monday, when Philadelphia’s vaccination eligibility expanded to include sanitation workers, maintenance and janitorial staff, utility workers, and postal and package delivery workers.

”This will be good,” said Richard Hooker Jr., secretary treasurer and principal officer of Teamsters Local 623, which represents about 4,500 UPS warehouse workers and drivers in Philadelphia who have experienced, “a lot of anxiety, a lot of concern, again because we’re not getting the vaccine but we’re delivering the vaccine.” 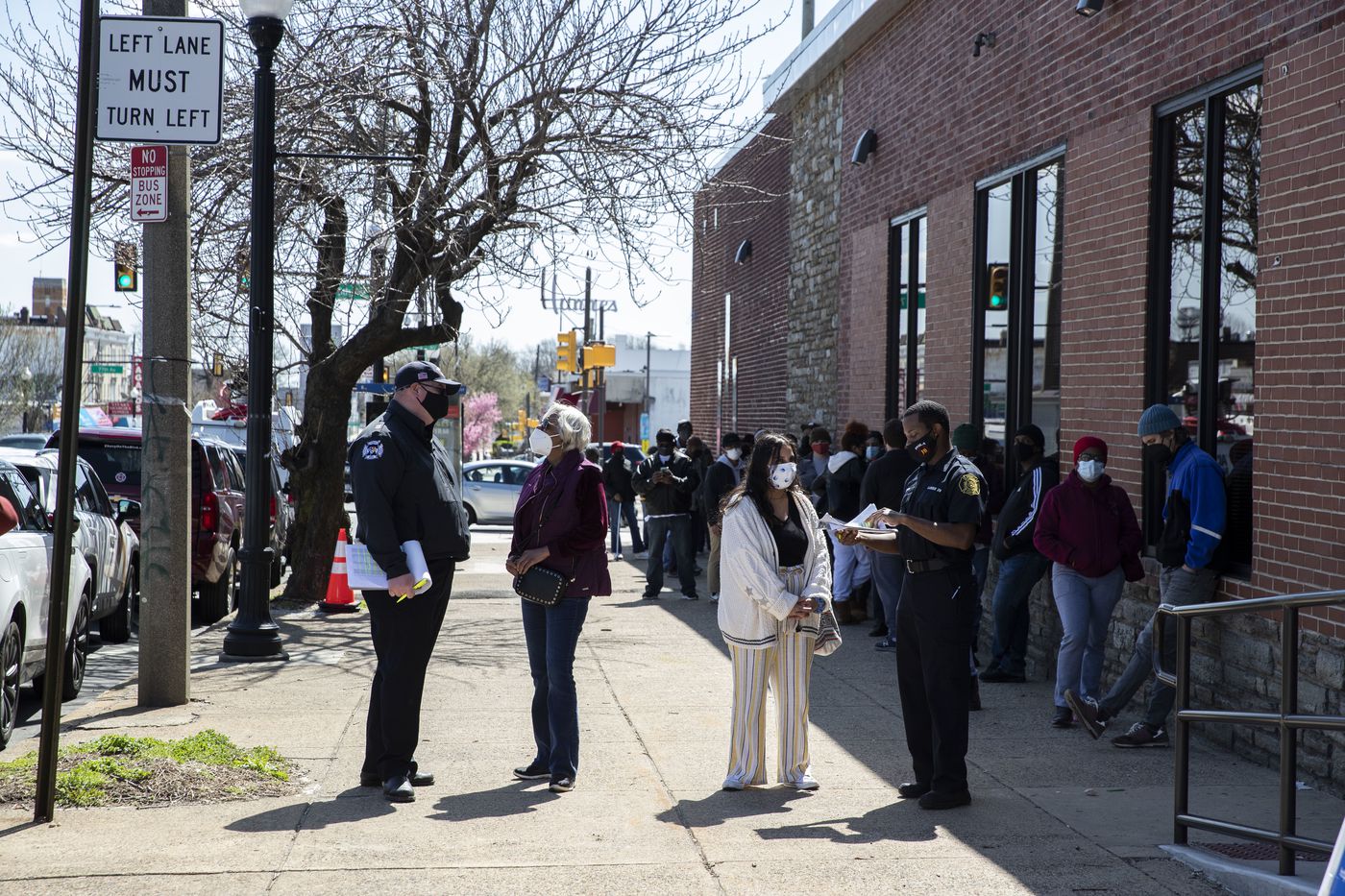 Throughout the region Monday, the vaccination rollout reached new stages. Pennsylvania, with a program separate from Philadelphia’s, began vaccination for up to a million people in the 1B category. People in the 1C category will be eligible for shots on April 12. New Jersey expanded eligibility Monday to people 55 and older. The state also confirmed it would offer vaccine to everyone 16 and older starting April 19 — matching Pennsylvania’s plan for the state’s adults announced last week.

It is time, Gov. Phil Murphy said Monday, to make an “aggressive push” to meet the state’s goal of vaccinating most adults by the summer.

”Given the trajectory we are on, we believe this is the right time to put our program into higher gear,” Murphy said.

Everyone in Delaware ages 16 and up will be eligible for vaccination beginning Tuesday.

COVID-19 cases in New Jersey, Pennsylvania, and Philadelphia have been trending upward over the past month, as they have across the country, alarming health officials both locally and nationally.

With vaccine supplies growing larger and more certain, logistics appeared to be easing. Chester County gave 24,202 people in the 1B category — which includes first responders and manufacturing, education, and public transit workers — access to schedule appointments on Monday morning. Montgomery County opened its preregistration portal and phone hotline to people in 1B on Monday. As the county continues vaccinating people in the 1A group, officials estimate it will be a few weeks before people in 1B begin to receive their shots — though just being able to make an appointment is a big step forward in building confidence, many say.

The expansions in both New Jersey and Pennsylvania will arrive about two weeks before the May 1 deadline set by President Joe Biden, which Philadelphia is maintaining for offering full access.

In Pennsylvania, a state of 12.8 million, more than 3.6 million first vaccine doses have been given, and more than 2 million second doses.

Relieved as they are to get access to vaccines, workers at the front lines of the pandemic expressed frustration that it took this long. One UPS worker at the Philadelphia International Airport facility said many coworkers have been infected with COVID-19, possibly because social distancing is difficult in their line of work.

“I think by far most of the people I know have been positive at some point,” said Ryan Boyd, voicing frustration with his coworkers’ wait for eligibility. “I think it’s [the delay in vaccinations] disappointing considering the role we played.”

“Philadelphia, to do what they did to us is unacceptable,” said Nick Casselli, president of the American Postal Workers Union Local 89.

The city’s Vaccine Advisory Committee set the Philadelphia Department of Public Health’s priorities for vaccination, said James Garrow, a Health Department spokesperson. The committee, made up of experts including hospital staff, health care providers, and social service workers, recommended priorities “based upon level of exposure and epidemiological evidence of higher risk of hospitalization and death,” Garrow said.

Hooker said almost 200 people among his local’s UPS workers have had the virus, with cases still cropping up. Cases have been increasing among about 1,400 Philadelphia workers represented by the American Postal Workers Union Local 89, which includes truck drivers, mechanics, and office personnel, Casselli said.

Grocery store, pharmacy, liquor store, and food processing workers all face much higher risk of contracting COVID than the general population, said Wendell Young, who represents 35,000 workers statewide as president of the United Food and Commercial Workers Local 1776. Philadelphia’s workers in that category have been eligible for vaccination, while those outside the city who just got access March 31 remain terrified to bring the virus home to their families, he said, despite adhering to safety protocols that have kept case counts low.

“For our members who work and live outside the city, this is really good news,” said Young. “Now they can all get these shots.”

Others who became eligible March 31 in Pennsylvania included firefighters and emergency medical workers.

“These are people who work hard every day and don’t have the option of teleworking from the safety of their homes,” Pennsylvania’s acting Health Secretary Alison Beam said last week. “Each of these sectors has continued to go to work day in and day out to ensure that life in Pennsylvania has continued.”

How newly eligible workers will get shots, though, remains an open question. Hooker is working to coordinate a clinic for his personnel through RiteAid, he said.

RiteAid has hosted four vaccination clinics in the city, with a total of 1,600 doses administered, all in collaboration with the NAACP, and two more clinics also involving the AFL-CIO, a corporate spokesperson said. Some postal workers didn’t wait for the city to declare them eligible, and received shots through the union-hosted clinic on March 24 and 25, workers’ representatives said.

“We took the ball and we got our own people vaccinated,” said Casselli, “most of them in the last two weeks.”

Other clinics are expected to be held on the next two Sundays, he said.

Eligibility for mail carriers is like “a light at the end of the tunnel,” said Joe Rodgers, who heads Branch 157 of the National Association of Letter Carriers.

“It’s great news for all of my members and all the postal employees, that at least we have an alternative,” he said. “Before, we were just flying in the dark.”

A UPS spokesperson said Monday that the company encourages employees to follow public health guidance; they did not say whether the company would organize vaccine clinics.

Union representatives said the majority of their members were eager to get doses.

“We used them all,” Casselli said. “They were clamoring for more.”

There was “tremendous interest,” Rodgers said, among his members. Hooker said about 80% of his members were eager to be vaccinated.

Among Young’s members, some members have expressed hesitancy about getting the vaccine, and so the union has arranged town halls with shop stewards and vaccine experts to dispel misinformation about the vaccine. The international branch of Young’s union even booked Anthony Fauci, the director of the National Institute of Allergy and Infectious Disease, response, for a 15-minute town hall earlier this year.

The union has also worked with employers like Acme and JBS, the owner of a meatpacking plant in Montgomery County, to give workers cash incentives to get the vaccine. The union itself is asking members to enter a copy of their vaccine cards into a raffle where they can win up to $500.

“We’re going to send them a certificate that they’ve been vaccinated, and for those who work in the food factories, we’re sending a helmet sticker for their hard hat. It says ‘Vaccinated — Victory Over COVID,’” Young said. “We’re trying to create the atmosphere of, ‘Hey, everyone’s doing their part to make everyone safe.’ ”