At the 30th International Convention, Teamsters from all levels of the union—the International Union, Joint Councils and local unions—voted to pass an historic resolution on Amazon.

The resolution sets forth a unified approach to mobilizing the union and engaging Teamster members. It resolves to maintain standards in Teamster core industries against the threat posed by Amazon and support Amazon workers as they build power across the country.

The resolution also approved the creation of a Division structure within the International Union for the Amazon Project and to fully fund and supply necessary resources to support its goals.

Randy Korgan, Teamsters National Director for Amazon and Secretary-Treasurer of Local 1932 in San Bernardino, Calif., gave a powerful presentation to the Convention about the Teamsters’ proud history of building the logistics industry over the course of more than 100 years. Teamsters fought for and won good, middle-class jobs with family-sustaining wages, health care, retirement and safe working environments, and want all workers to have the same opportunity.

“For Teamsters, and the labor movement as a whole, Amazon poses an existential threat to the rights and standards our members have fought for and won. But it also poses a tremendous opportunity for us to engage our members, build large volunteer organizing committees, build even stronger community labor alliances, more deeply integrate racial and other social justice struggles into our work and more,” Korgan said. “Standing on the shoulders of proud working people, who built our union for more than 100 years, the Teamsters will build the types of worker and community power necessary to take on one of the most powerful corporations in the world and win.” 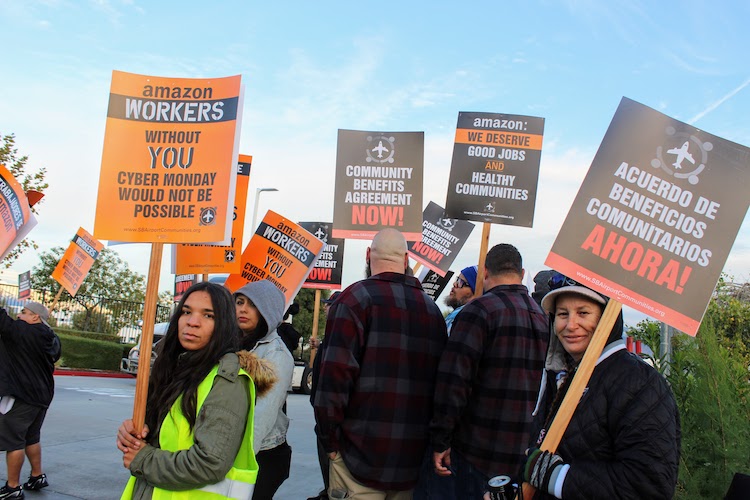 The Convention’s Amazon segment featured messages from warehousing and delivery Teamsters who are active and engaged, supporting their brothers and sisters at Amazon.

Jason Arias is a member of Local 773 from Allentown, Pa., who used to work at Amazon. He now works at UPS and knows the difference a union can make.

“I keep hearing Amazon is looking to cross over into new industries. They’re not satisfied with just dominating logistics. What will our communities look like if they continue their monopoly tactics?” said Ralph Sistos, a Local 683 member who works at Sysco in Riverside, Calif. “I’m proud that my union will do everything it takes to keep Amazon from succeeding in swallowing up just about everything. Everything we love about our country and our neighborhoods is at stake.”

Bills are being introduced on the federal and state levels to address this dominance. This week, in a letter, Teamsters General President Jim Hoffa urged the U.S. House Judiciary Committee to vote yes to a series of bills that will address corporate antitrust and dominance for big tech companies, including Amazon.

“As Teamsters, we are sparking the fire that leads to change. Because when we succeed in raising standards, all workers succeed,” Korgan told the Convention. “Today, I call on you brothers and sisters, to mobilize.”